A clever campaign of internal emails, officious out of office replies and a searing cover interview with the Radio Times heralded Alan’s return to his spiritual home, the BBC.

After 24 years he’s back. Alan Partridge has secured a primetime (albeit short-term) slot back on the BBC, more than two decades after he shot a guest live on air, bringing his chat show Knowing Me, Knowing You to an abrupt end.

With excitement at fever-pitch about Partridge’s return to the BBC as the stand in presenter of magazine show This Time, it’s fair to say the fires of anticipation have been stoked still further by some very clever hype.

The first we heard of Alan’s proposed return to the BBC was in the documentary Alan Partridge: Why, When, How and Whom? screened in December 2017, well over a year before the trailer for This Time with Alan Partridge landed earlier this month.

Unsure what form the ‘new project’ might take, the trailer showed the first glimpse of a blazer-clad Alan squeezing up to fellow presenter Jennie Gresham on a magenta sofa, begging a runner for a glass of water to soothe his dry mouth.

Gresham, it seems, is unaware of how Alan has broadened his broadcasting oeuvre since he was unceremoniously dumped by the BBC. How could she be oblivious to his stint on Norwich FM, his long running North Norfolk Digital show Mid Morning Matters, the fulsome tour he provides of Norwich’s leisure centres and markets in Places of My Life or his social commentary/redemption story Scissored Isle? Lest we forget his military based quiz show Skirmish and range of corporate videos including Be the Best Fire Warden.

It’s not just Gresham who seems to be unaware. As Alan explains in his cover interview with the Radio Times, away from primetime BBC he has remained a “vital presence towards the fringes of TV Land”. Indeed Partridge scolds the publication for dropping him after he parted ways with the BBC, despite the fact he was one of the few broadcasters to attend the Radio Times’ party celebrating the deregulation of TV listings in 1991.

Alan points out that whereas he appeared in four issues of the magazine from 1994 to 1995 (3.9% of the total), this dropped to a lowly 0% from then onwards, a move the veteran broadcaster describes as a “stunning lack of class”.

However, after seeing presenter Dom Littlewood on a consumer affairs programme use a wad of notes to signify how the owner of an un-insulated home was wasting “pound, after pound, after pound” Partridge realised he needed to return to mainstream TV to “halt the malaise”.

What is so clever about the interview is that Partridge – in his churlish, vengeful and giddy way – takes a swipe at all the media institutions which forgot about him during his years in the wilderness, while also showing how fundamentally aligned he is to the institution that is the BBC by laying into the subscription price for Netflix and dismissing former employer Sky Atlantic as an “obscure channel”.

Between the trailer and the interview it is fair to say that Alan anticipation was poised to spill over. Then today, the email happened.

In a genius move, Partridge sent an internal email to over 20,000 BBC staff with the subject line ‘Clearing the Air’. Shared by BBC employees across social media, the internal memo highlighted Alan’s desire to set the record straight and regain his position in BBC folklore.

Firstly there is his pride at being a “colleague”, a bona fide member of the BBC payroll. This said, there remains a residual gripe with the BBC, as evidenced by the suggestion that the broadcaster “sidled” up to him to propose he stand in as presenter for This Time and the admission that he continues to avidly watch its programmes “regardless of their quality”.

There is the childish glee at a rival’s expense, as Alan informs his BBC colleagues that he is standing in as a result of regular presenter John Baskell’s clogged up arteries. There is even the petty swipe at the sneering compliance lady “Karen or Kate or Kath” who thought he would never be welcomed back.

And of course this wouldn’t be Alan Partridge without a narrowing of the eyes at his old foe, the commissioning editor. The ghost of Tony Hayers rears its head when he searingly describes the BBC as being full of “braying, know-nothing chancers doling out fat commissions to their braying, know-nothing Oxbridge mates”. 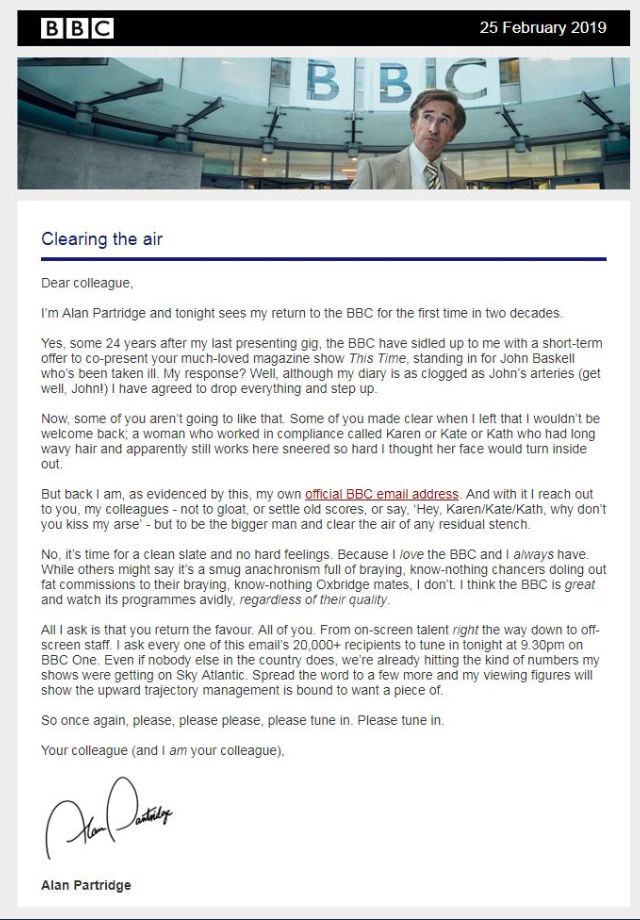 However, behind the pettiness and venal desire for vengeance is a needy, but genuine desire to be welcomed back into the BBC fold. In the email he proudly refers to having been given an official BBC email address, which upon emailing generates an out of office message, so officious and sneering it is pure Partridge.

In the out of office he points out that if your email was urgent you should have tried calling instead, and that typing the query out long hand suggests you can wait, even if you add a “red exclamation next to your email to make it stand out in my inbox”.

There was always going to be mega hype for the return of Partridge to his spiritual home the BBC. However, what has been so clever is the way the build up to This Time has blurred the lines between fact and fiction, embedding the character of Alan even deeper into our psyches and showing that despite all the spite, desperation and years spent in the broadcasting wilderness, Partridge has finally come home.