We’re living in an age of destructive repetition – a phenomenon that crime drama True Detective explores with devastating insight.

Steve Bannon, the alt-right figurehead and former chief strategist to Donald Trump, has spoken previously of his admiration for a book called The Fourth Turning, published in 1997 by two amateur historians, Neil Howe and William Strauss.

The book argues that world events unfold in cycles of around 80 years each, which can themselves be divided into four stages, or ‘turnings’: growth, maturation, entropy and destruction. According to the authors’ theory, these cycles have repeated themselves throughout history and, with the same regularity, we could now be in the midst of the final stage (or ‘fourth turning’) of destruction.

Whether you buy into the theory or not, it’s clear that the stability of the international order is under intense strain in 2019, as manifest in issues like Brexit and the growth of far-right movements worldwide. Not only that, this year marks 80 years since the beginning of the Second World War – potentially a neat fit with the authors’ cyclical timeline, should the current climate of instability worsen.

The idea that history moves in inexorable, inescapable cycles is problematic, because it reduces human beings to compliant players in a pre-determined game. It suggests ultimately that there is little scope for societies to change course in the here and now.

Yet looking at some of the problems playing out in politics or economics currently, it is hard to shake the feeling that we are trapped in the same old destructive behaviour patterns, heading for the same destructive results seen time and again. 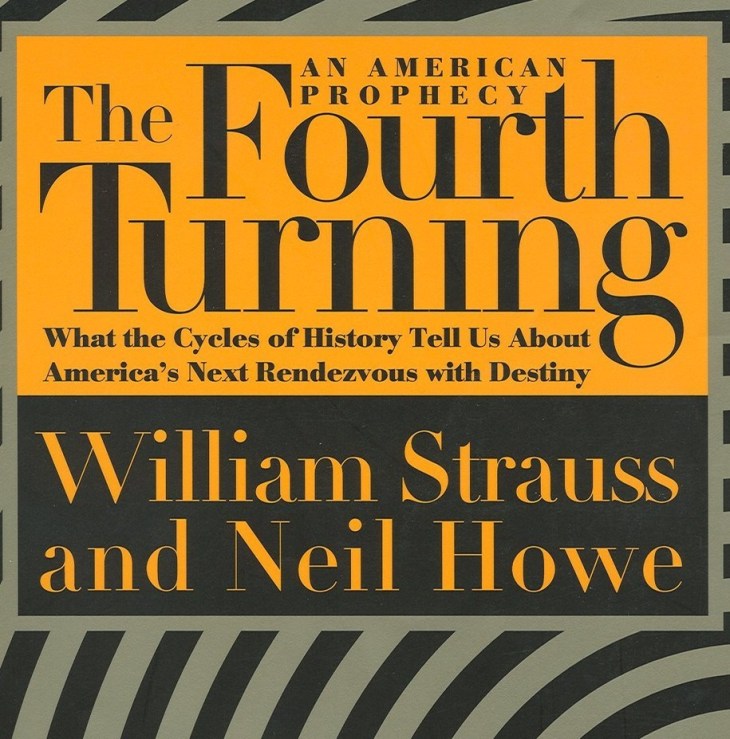 Brexit is a prime example. The vote to leave the EU in 2016 signalled deep dissatisfaction with the status quo from large swathes of the population, yet rather than properly introspect and consider how the country needs to reconfigure itself in order to meet these calls for change, the political class has retreated to the comfort of the same old behaviours which led to failed policies and mass discontent in the first place.

Establishment efforts to truly understand the motivations of Leave voters, and to respond to the deeper meaning of the referendum, were abandoned within weeks of the result, no lessons learned. The same could be said of the lack of searching answers offered in respect of Trump’s election victory in the US.

In the economic sphere we also appear trapped in a cycle of destructive behaviour. The 2008 financial crisis was caused by the collapse of the sub-prime mortgage market, which had ballooned to unsustainable levels through a combination of greed, negligence and a lack of regulation across financial institutions.

Following the crash little tangible action was taken to deal with its causes, with only one executive on the whole of Wall Street jailed for criminal behaviour. Instead, institutions went back to packaging up the kind of high-risk debt products that had precipitated the crisis in the first place.

Now, just a decade on, the warnings signs are back that we may be on the brink of another sub-prime crash that could again throw the global financial system into meltdown. For a more immediate example closer to home, look at the fact the UK government is continuing to throw money at huge outsourcing groups despite the catastrophic collapse of businesses like Carillion. The wheel turns, and apparently we keep repeating our disasters.

But rather than buy wholesale into the theory of The Fourth Turning, which feels overly sweeping in its broad-brush view of history, I’m drawn more to the philosophy of an acclaimed TV crime drama – True Detective – which features one of the best interrogations, within any artform, of the concept of destiny.

Season 3, starring Mahershala Ali, premiered this week with a split-timeline narrative similar to the brilliant Season 1. It is this device, which jumps forwards and backwards in time, that is used to explore the seemingly cosmic predictability of human folly.

In Season 1 Rust Cohle (Matthew McConaughey), a troubled detective prone to bleak philosophising, articulates this theory of cyclical disaster. One episode sees him discuss the idea that “time is a flat circle” – an all-consuming force that destines human beings to continually repeat their catastrophes. This theory sits alongside Rust’s argument elsewhere in the series that during their evolution, human beings became too self-aware, and that this psychological trigger resulted in a universal delusion about our own individual importance and exceptionalism.

These ideas manifest themselves in various ways throughout the series. Discussing the case of two abused children that he and his partner Marty Hart (Woody Harrelson) rescue from their kidnappers, Rust posits that such abuse will occur “again and again and again” – a dark take on how humankind’s propensity to do violence to itself echoes through history.

In the earliest timeline, meanwhile, Marty is shown having an affair which tears his family apart. After winning back his wife and trying to reform himself over many years, he’s shown later in the series to have slipped back into the same adulterous behaviour, and so he loses everything for good.

The spectre of climate change – perhaps the best example of our inability to break free from our self-destructive behaviours – also looms large over Season 1, as Rust ponders how the swampy plains of Louisiana are “gonna be underwater in 30 years”. From an early look at season 3, in which the story is told over a time period spanning from 1980 to 2015, the same existential conundrums seem to feature heavily again.

This may all seem rather pessimistic if applied to the situations we face in real life today. But I prefer to see the philosophy of True Detective as an interesting guide to why things come back around, and to the eternal struggle of human beings to break free from these cycles.

Season 1 even ends on an optimistic note, with a message about the importance of not giving up, no matter how fatalistic the future may seem. It’s the kind of optimism we need in the world right now as we continue to repeat our mistakes, and continue to try to find a better way.