From homes with no walls to living in ‘airspace’, Generation Rent is coming up with innovative solutions to help end the housing crisis.

Home ownership is a remote dream for a generation of young people who have become perpetual renters, slowly adjusting to the reality that they are being forced off the property ladder by a crippling lack of affordable housing.

Nationwide the prospect of becoming a first-time buyer is rapidly slipping out of reach. Home ownership in England is at a 30-year low according to the English Housing Survey, published in March last year. By contrast, the private rented sector has doubled in size since 2004.

Figures from homelessness charity Shelter suggest that on average house prices are now almost seven times a person’s income. In the capital in particular, getting your foot on the property ladder is a distant dream for people of all ages. In Central London, for example, average house prices range from £481,100 in Tower Hamlets to £1.3m in Kensington and Chelsea.

It is clear that our collective response to the UK’s housing crisis has to be swift and holistic. Regulation for private landlords that would help maintain standards for tenants needs to run in conjunction with an increase in social housing, providing much needed homes for Britain’s hidden homeless.

While far from a fix for everyone, a number of companies have taken up the challenge to tackle our housing crisis head-on, each sharing the belief that innovation must be at the heart of the solution.

Established in 2013 for “young Londoners”, Naked House positions itself as a not-for-profit developer of minimalist affordable housing aimed at people on modest incomes.

The concept is based on the principle that a Naked House will never cost more than a third of the buyer’s gross household income. As a result the scheme is open to homebuyer’s with an annual income of £90,000 or less.

The flats and houses on offer will be – by definition – naked. The minimalist design incorporates electricity, heating and a basic bathroom, without the added complication of partition walls, flooring or wall finishes. These ultra minimal homes are broadly speaking intended to sell for 40% less than standard new builds in London, at around £150,000 and £340,000.

Naked House claims that keeping the budget down allows the buyer to tap into their own “DIY spirit” and create a space they love from a blank canvas.

A render of a Naked House interior. Soon to be a reality thanks to funding from @MayorofLondon @LDN_gov #affordablehousing #housing pic.twitter.com/1YJOxKINIg

The plan is to repurpose three council-owned sites in Enfield to build 22 affordable homes, with priority being given to people who live and/or work in the area or first-time buyers. The team expect to start building in 2019, with the finished homes being unveiled in 2020 at around 65-70% of the full market value.

The scheme in Enfield is backed by London Mayor Sadiq Khan, who in April 2017 committed £500,000 to the project, making it the largest custom-build development in London.

Naked House is also working with Lewisham Council on a site in Brockley, South London, while a further development with Croydon Council is currently under wraps.

Guardianship is another potential fix for the housing crisis. The premise is that renters essentially “house sit” unoccupied properties, thereby taking care of the building on a short-term basis.

One company at the forefront of this trend is London-based Lowe Guardians, which provides property owners with a low-cost solution to keep their vacant building secure, while at the same time providing affordable accommodation for “young professionals, key workers and creatives.”

Lowe Guardians offers guardianship in a number of locations across the capital, from a former bank in Marble Arch to an old doctor’s surgery in Brixton and an ex-care home in Camberwell. The company positions guardianship as a short-term solution that allows young professionals in London to live in interesting, culturally relevant and well maintained buildings at an affordable price.

There is no time limit on being a guardian, but to meet the criteria you must be aged over 21, considered socially responsible and willing to be part of a community. Rents range from £1,000 a month for a three-bed flat in Acton Town to £400 for a room in an old pub in Battersea, all with bills included.

The team aims to establish a sense of community in every space they take on, from creating communal areas designed to facilitate social interaction to hosting film nights and barbecues for its guardians.

Lowe Guardians is also dipping its toe in the trend for modular homes, teaming up with architects Studio Bark to create Shed, an environmentally-friendly prefab that offers “affordable accommodation” in vacant buildings. 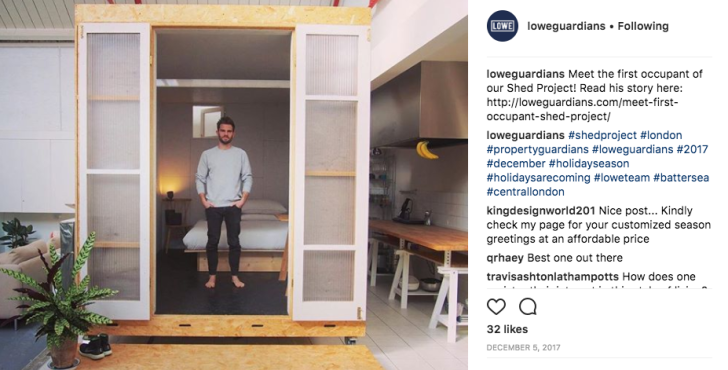 Comprising a bed and living space, the prefab takes one day to build and can be erected again in a different site. It is constructed from low-impact British-made materials, mixing Oriented Strand Board (OSB) with lamb’s wool insulation and a small amount of recycled polyester.

Separate to this main service, Lowe Guardians has also developed a solution offering affordable rental for London’s key workers. Open to people working in the police, health service, education and non-profit sectors who are being priced out of the areas they work, the Lowe Key concept aims to marry the large amount of vacant, publicly owned property across London with responsible tenants working in key industries in their area.

Fancy living in the air? That could become a reality if Apex Airspace Development has its way.

The developer converts unused ‘airspace’ above the rooftops of residential, commercial and public buildings into new homes. The airspace is purchased from private and institutional freeholders, retailers, local councils and housing associations to convert into apartments. Payment to airspace sellers is linked to the development potential of the property.

The “airspace” property itself is a modular design, 95% of which is constructed off-site and can be installed in a single day.

Having already developed one site in Camden, Apex claims to have identified a further 60,000 locations across London that could accommodate two to three-storey prefabs. The company’s aim is to create 800 new homes by 2021, each reportedly ranging in price from £300,000 to £500,000. Apex already has its sights set on a number of Tesco superstores across the capital.

While these solutions may not work for everyone, it is surely a positive step to see different businesses working on creative ways to tackle the UK’s housing crisis.