From keyless home entry to AI-powered cameras selecting our pictures, the global tech giants are poised to claim an even bigger share of our lives.

Imagine a world where you could let a delivery man into your house to drop off a parcel even when you’re 50 miles away. That dream (or for some nightmare) is well within reach courtesy of Amazon Key, a smartlock and app that allows users to remotely authorise couriers to unlock their front door.

Customers simply select “in-home” while shopping on Amazon and when the order has arrived at their door the shopper is sent a notification. Amazon then verifies the request through the app and the courier unlocks the door using a handheld scanner.

Available exclusively to Amazon Prime subscribers in 37 US cities, Amazon Key gives users the ability to schedule permanent access to their homes for family members or give temporary access to people like cleaners or dog walkers. The user can keep an eye on the property via a smart home camera set up to monitor the front door. Remote access to your home, now just a click away.

Not to be outdone, Google has produced an AI camera that takes pictures so you don’t have to. Trained to recognise the faces of people and animals, Google Clips acts like an all-seeing eye, capturing the moments it believes are most significant within its 130-degree field of vision.

Each recording taken by the camera’s 12-megapixel sensors can be exported as a video, photo or Gif. Users simply open the app and scroll through the images the camera thinks you might like. So time-poor is our society that apparently we don’t even have 30 seconds to take our own photos anymore.

And if you thought Uber was content at being just a taxi service, think again. From November 2 the company plans to give users the option to apply for a credit card straight through the app. After a couple of minutes for a credit check, the card will be automatically available to use for Uber car journeys or to buy food via UberEats.

Users will be offered a $100 bonus after spending $500 on purchases within the first 90 days and 3% back on short-haul stays at hotels or via Airbnb.

If unlocking our homes remotely, letting cameras take our pictures and using an Uber-approved credit card wasn’t enough, our friends can now track our every move in real time thanks to WhatsApp.

Announced earlier this month, the live location tracking feature allows users to share their movements by selecting “Share Live Location”. The user then pops up as an icon on a map that their friends can track for a limited amount of time. WhatsApp is billing the new functionality as a safety feature, perfect for a world where people live in real fear of terrorism on a daily basis. 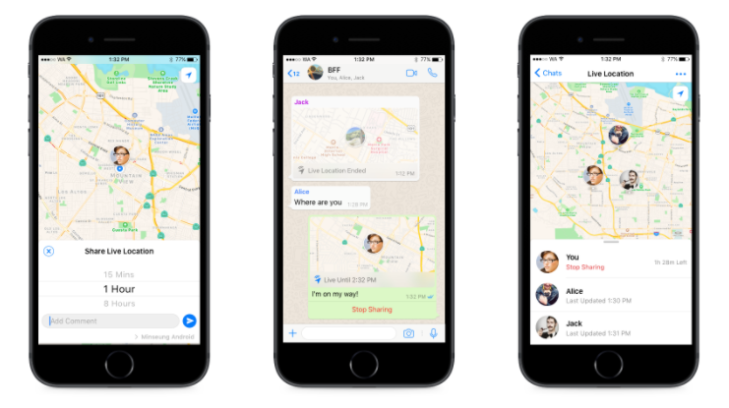 As well as sharing our movements with our contacts, now we can rate them. Tbh, Facebook’s latest acquisition in the teen app market, is positioned as an “anonymous teen compliment app” that aims to offer a social network that helps people “feel better about themselves”.

Targeting the 13-18 year old market, which continues to score poorly for Facebook in comparison to rival Snapchat, tbh invites teenagers to sign up via their school and age, before asking them to rate their contacts based on a variety of different polls such as “Who has the best smile?” or “Who is hotter than the sun?”.

Users who are picked by a friend are rewarded with a gem. A pink gem says you’re nominated by a girl, blue by a boy. You can also scroll down a list entitled “See who likes you”.

This new breed of poll-based social network appears to be attracting the desired target market. Since launching in August the app already has 2.5 million daily users and has been downloaded by more than 5 million people.

However, rather than offering a positive alternative to counteract the world of cyberbullying, surely tbh plays straight into the toxic teen cult of popularity by actively widening the gap between the highly rated “popular kids” who consistently win gems – and everybody else. It also encourages teenagers to reduce each other to a certain “type”, as if explaining who a person is were ever that simple.

Our pursuit of technology to support our time-poor lives has reached such a point that we trust Amazon to unlock our doors, Google to decide which pictures sum up our lives and Uber to manage our money. In exchange for all these services we are sharing our most personal data with a handful of global companies, who can then use this information to track us, rate us and sell to us with ruthless efficiency.

And just because a service or shiny piece of tech appears to be seamless does not mean it will necessarily improve our lives. Only this month Bloomberg accused Apple of downgrading the accuracy of its Face ID smartphone verification technology in order to get the iPhone X to market quicker.

While Apple denies the allegation, stating that there is only a “one in a million probability” of a stranger unlocking an iPhone with Face ID, doubt remains whether the Californian tech behemoth is really putting customer safety above profit.

As tech creeps ever closer into our lives, surely the time is coming when we will need to decide where to draw the line.