Minimalist illustrator Marcus Reed takes us on a visual history tour of UK subcultures from Mods to Madchester.

Anyone growing up in the UK over the past 40 years is likely to have been part of at least one subculture. From the hopeless elegance of the New Romantics to the raw energy of the rave scene, it is a very British rite of passage to spend your formative years growing up in a subculture that defines your every waking minute.

Illustrator Marcus Reed chose this particular phenomenon as the subject of his debut book – Saturday’s Kids: Ten Years of UK Subculture Influences – which explores the subcultures that have shaped his life so far.

A visual history of growing up in Britain from the 1980s onwards, the book features over 200 illustrations drawn in Reed’s signature New School Modern style, which he defines as a modern vector-based technique “with a retro kinda feel”.

Saturday’s Kids starts with modernism and the Mod Revival of the early 80s, personified by The Jam and their iconic frontman Paul Weller. Reed then seamlessly moves from the skinhead scene to new wave and casuals, before exploring the fashion of game changing US import, Hip Hop.

He dips into the Madchester era of The Stone Roses and Happy Mondays, then onto indie and the 1990s phenomenon that was rave.

“Rave was the last great UK subculture in my eyes,” Reed reflects. “The music, the fashion, the drugs. All new and unchartered, great days indeed. Hip Hop is another particular stand out, predominantly due to the graffiti aspect of the subculture.

“But I’d say contemporary [culture] is a favourite as you’re illustrating about the now as well as the future, instead of past glories. It just means everything is new and hopefully on point. It’s very hard to be original these days as everything has been done before. Hopefully something down the line will throw a new opportunity up.”

Reed brings his visual narrative to a close with contemporary culture, which would not be complete without a nod to the rise of the hipster.

In the book the late-noughties hipster exists in a number of variations, from the golden bearded hipster complete with his canary and spaniel, to the nautical chic hipster and his more acceptable cousin, the selvedge denim-wearing hipster accessorising with a lime beanie.

“It’s almost a cliché now to brand anything that’s trendy or different as ‘hipster’ considering ‘hip’ has been around since the 50s and probably before,” says Reed.

“Get beyond the top knots, excessive beard lengths, artisan bread and cafés that just sell cereal, and ‘hipsterdom’ does have a lot to offer. But is it here to stay? Probably not.” 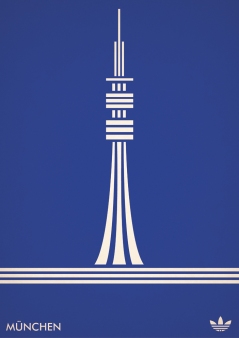 Reed has spent his whole career in the creative industry, starting out in graphic design and print before moving into advertising by joining ad agency heavyweight Saatchi & Saatchi as a junior storyboard artist.

After spending four years in-house, Reed knew it was the right time to go freelance and explore the freedom of working for himself.

“I do love the feeling of releasing the restrictions of working to a brief. The freedom you have to illustrate for yourself and like-minded people is very moreish,” he explains.

“It’s kind of the ‘commercial studio’ life I’ve left behind. It’s very unforgiving, spending literally three days at work and sleeping under your desk when you got the chance. There was a huge risk of burn out, which I felt was happening. It’s good to feel so refreshed and more creative being out of that environment.”

Freelance illustration also opens up the possibility for collaboration, which is something Reed continues to explore following high profile tie-ups with fashion label Original Casuals and Harrods.

The luxury department store commissioned him to produce all the illustrations for its Christmas 2015 Magical Marionette campaign, which included creating a 90 second animation in conjunction with London-based design and animation studio, Art & Graft.

“Harrods were great to work with. They had the right approach to commissioning illustrators of ‘we love what you do, here’s the formats and loose content, please create something lovely’,” Reed recalls.

“Whereas some brands or agencies commission you for your style and then bastardise it until it becomes something else. I’ve never seen the point of that to be honest.”

Within the craft beer scene Reed is best known for his work with South London brewery Gipsy Hill. He started designing the labels, branding and visual identity for the brewery three years ago, turning the three founders into illustrations which appear on the labels for Gipsy Hill’s Southpaw, Beatnik and Dissident beers. Reed himself appears on the label for tropical-citrus session IPA, Hepcat.

Looking ahead, Reed intends to broaden his scope with plans afoot to work on a clothing label and a desire to get stuck into more animation projects. The future looks bright, especially as he believes the best is very much yet to come.

“The next project will be my favourite one, as you never know what it’s going to be. That’s the thrill of the chase.”